I have rarely witnessed anything as truly ludicrous as Vang Vieng. Droves of backpackers originally flocked to this town because of its position on the Nam Song surrounded by limestone karst formations and tons of caves, and in response to the influx, Vang Vieng has completely whored itself out. The main tourism-driven innovation here is the TV bar: bar-restaurants where patrons lounge on cushioned platforms, drink beer, eat “happy” pizza and watch multiple, blaring television sets that play DVDs of American sitcoms. It’s tacky and horrifying, and I found one with The Simpsons and laid there for five hours.

A visitor to VV is expected to accomplish two things: (1) visit caves, and (2) tube down the river. I did one per day with my friend, Miriam (who is from Boston, but just finished university in London, and who I met in Muang Ngoi and have run into in every city since, because that’s how it is in Laos).

There are a lot of caves around VV, some great, some crappy. Miriam and I saw four of them easily because we went by motorbike (sorry, Mom – we did wear helmets [but they were Lao helmets]). The first cave was the least-developed, and required us to shimmy on our stomachs through the mud after a very small Lao boy with a headlamp. We weren’t really prepped for this. Miriam was wearing a miniskirt, and I had my eternal purse, which I had to launch down the cave ahead of me and then crawl after and retrieve. After traveling like this for some ways, Miriam and I succumbed to a laughing fit and were unable to squeeze along any further until it passed. We really mystified our tiny, non-English-speaking guide, who frantically directed his headlamp at all sorts of cave bugs and clumps of cave moss – I can only suppose in some effort to sober us up.

The second cave was bigger, with lights and stairs and things. Boring, actually, but there was a lovely blue pool outside by which we swam into the cave (in front of an audience of nine giggling, teenage boys). The final cave was the highlight: through this cave flows an underground river, and you have to sit in a tube and tow yourself through it by rope. The only light is your headlamp. The formations on the walls and ceiling are amazing. 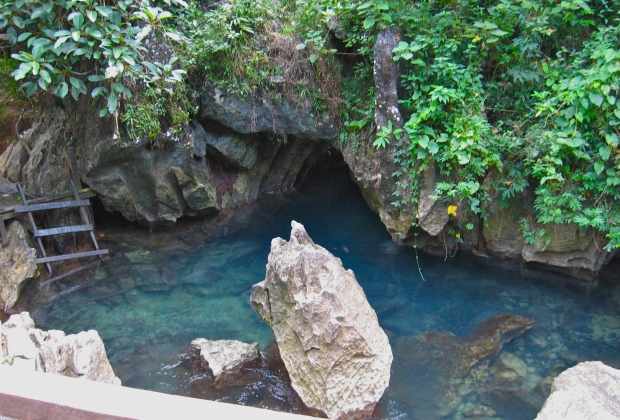 The next day, we dutifully tubed down the Nam Song. Everyone who comes to VV does this, and there are a number of riverside bars, all with zip lines, and all playing the same Bob Marley cd on a loop. There’s a hawker in front of each bar who screams ‘BeerLao, BeerLao,’ at the top of his lungs as you tube by, completely ruining any enjoyment you might have been taking in the truly gorgeous surroundings. As you tube past, they haul you in by bamboo pole (whether or not you care to go). In addition to BeerLao, the menus feature three different categories of substances that are not food. Strangely, the bars are mostly at the very start of the tubing route, and the two biggest are right next to each other. Miriam and I stopped at one of them, and met a hot (if vapid) American guy, but then a pockmarked, middle-aged Thai man who’d sent over an (unwanted) round plopped himself down in our bamboo hut and announced we should pay attention to him now. By the time we ran him off, the American was downriver chatting up some Brits.

I may as well take this opportunity to express my increasing disillusionment re: Laos. The country itself is beautiful, but traveling here is not quite what I expected. I feel I’ve been sucked into a current of tourism running south along the Mekong that is much more ‘Cancun on spring break’ than ‘hippie trail.’ I wanted to travel in order to learn about the world, not really to get trashed against a variety of backdrops. And if I can’t manage to communicate authentically with local people, I at least want to meet interesting fellow travelers. I guess I had this romantic idea that I’d meet a lot of war-torn, haggard activists with fascinating pasts and exaggerated notions of their own social responsibilities – and in China, I did meet a few – but in Laos, it’s all frat kids. Here’s what I’d like to hear more of from fellow backpackers:

‘I fear all my efforts in Sri Lanka were futile.’

‘Dude, you have to go to Chiang Mai: for ten bucks, you can totally wrestle a bear.’

Also, while I’m venting, all the fat, old white men here conducting around utterly bored and obviously rented Thai “girlfriends” is awakening in me an Eileen-Wuernos-type rage. I hope those girls are taking every last penny the losers have, and then I hope they kill them. Slowly. Perhaps I’m off-topic.

I’d love to write something about Laos, but I can’t quite make it out through the blinding screen of opium smoke and Friends episodes everywhere. I’m hoping things will get better south of Vientiane; I think most of this crowd hops back over to Thailand at the Friendship Bridge.