My mood, you will be happy to hear, improved upon arrival in Vientiane. Not that Vientiane’s so wonderful – it’s just a city. But it’s a city that would exist whether or not tourists came and that’s all I really required. Laos’ capital is not nearly as well-kept as Luang Prabang. The sidewalks in Vientiane are particularly unwalkable: most of them are the outlines of sidewalks with great mounds of sand within, or they have trees planted all along that so fill the sidewalk you have to keep stepping in and out of the street continuously. It is also necessary to keep a lookout for big, open holes leading down into the sewer system. Vientiane has about five million more tuk-tuk drivers than it needs (I long to have a T-shirt printed up that reads ‘I do not need a tuk-tuk’ in Lao script), and not nearly enough decent guesthouses. I had trouble finding one with vacancies, and in my search was shown some truly dreadful rooms (bed in the middle of a restaurant kitchen, anyone?) for quite high prices.

I did a bit of sightseeing in Vientiane, like a dutiful tourist. There is a big stone arch in the middle of the city called the Patuxai, which means ‘Arch of Triumph.’ It’s clear where the idea for the arch came from, and the concrete for it came from the US (which intended it for construction of a new airport, according to my Lonely Planet). 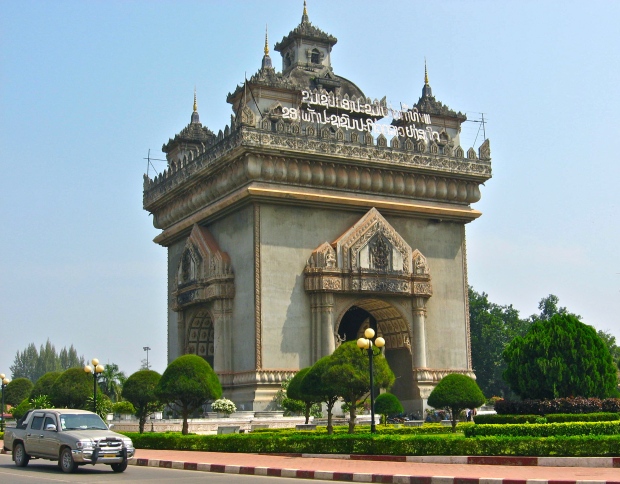 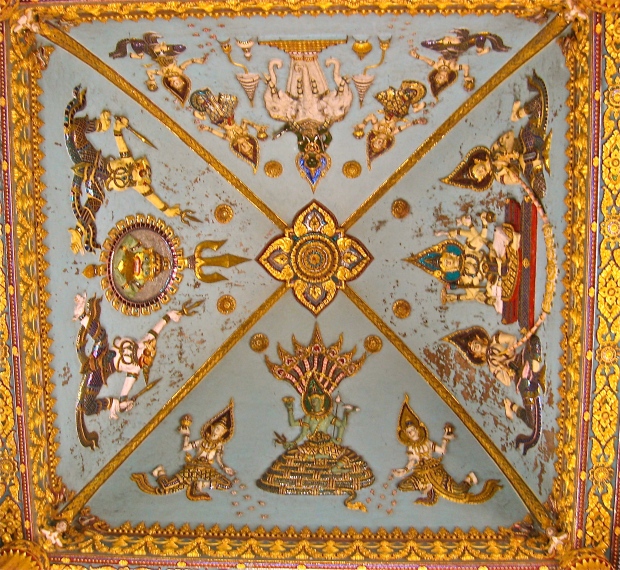 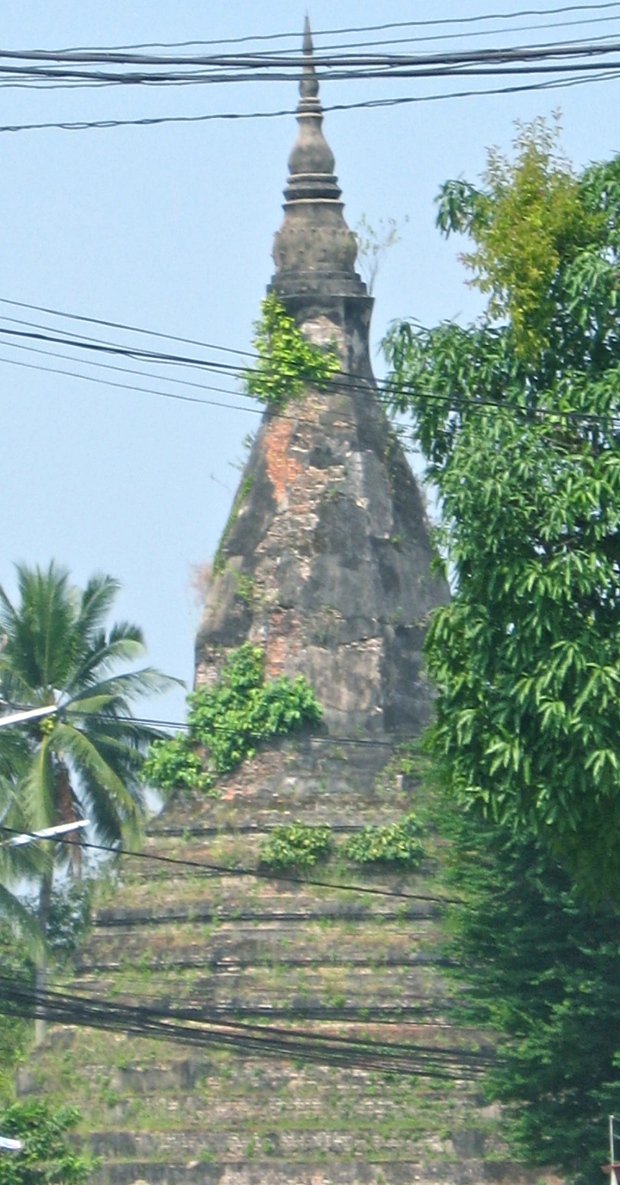 Vientiane also has the Laos National Museum. Downstairs are several exhibits on archaeological digs, of both the artifact and dinosaur bone variety. These exhibits mostly consist of photos and crude dioramas of the digs themselves. Upstairs are many rooms devoted to Laos’ history. After a room or two on the French colonialists (including a mural depicting French soldiers snatching Lao babies from their mothers’ arms and tossing them into a well), the museum basically turns into a warehouse of minor possessions that at one point passed through the hands of various ‘revolutionary heroes.’ For example: ‘spoon used by Comrade X when fleeing the US imperialist and its puppets’ and ‘shirt button of Comrade Y from shirt worn while planning the liberation of the Lao people.’

I only intended to stay a day in Vientiane, but ran into administrative difficulties. First of all, the Cambodian embassy was closed on Tuesday because of the King’s birthday, so I had to stick around on Wednesday. I then paid double for my visa because I didn’t bother to check what the price actually was before having an agency sort it for me, all because I was too cheap and lazy to take a tuk-tuk to the embassy myself. Then, the guy at the late-open exchange counter (where I had to go because Cambodia had my passport all day) refused to change my traveler’s checks because the signature on my passport (signed in 2000) didn’t match the signature on the checks (signed in 2006). Why this would matter, I have no idea. The ‘big’ bank where he said they’d assume the perilous risk of changing my checks didn’t open until 8:30 the next morning, and the last bus to Savannakhet (where I was headed) left at 9:30. I had to get money, though, because Vientiane was the last good shot before Cambodia to obtain US dollars, which I would need because Cambodia has no ATMs. So I cut it really close (though I still took time to haggle with three different tuk-tuk drivers on the fare to the bus station), but managed to get on the bus at 9:28. The bus then pulled right outside the station and sat there for 20 minutes, while vendors swarmed the aisle, spilling squid juice everywhere and leaning into my lap and leering at me.

The nine-hour bus ride started out pleasantly enough and slowly turned into hell on wheels, as long bus trips are wont to do. This bus made it all the way to Tha Khaek (two hours from Savannakhet) before breaking down. We all sat around the bus station there for well over an hour while they worked on it. And lucky for me, one of my fellow passengers sitting near me (all men, as the women disappeared somewhere as soon as the bus parked and didn’t reappear until it left the station again) spoke English, so I got to have a lot of quality conversation with a genuine Lao person. Here’s what he had to say:

‘Where is your husband? Why you’re not marry? You look for a husband in Lao? You like Lao boys? You cannot travel alone! Oh, with friends. Men friends? Where are your men? Why they’re not with you? I have phone – we call them now to meet you. This lady want to know, do you like this boy? He will travel with you to Savannakhet. No? I have house – you stay tonight, tomorrow I take you to find you boyfriend. (Here, here, you like baguette? Take, take, I buy too much!) This boy, he not marry.’

And so forth. I have this conversation with everyone in Laos. Women just do not travel (or do anything at all) unaccompanied in this country, and it worries the hell out of everyone when I get on a bus alone. They feel it is up to them to remedy the situation immediately. I have kicked up my China lie (my boyfriend is at the hotel bar because he hates China and won’t go with me anywhere) to a new, sturdier Lao lie (my husband is in Wherever already, because he had to go yesterday, because [something garbled to do with money said too fast for an ESL-speaker to grasp]). The most annoying thing about all this is that I would love at some point to discuss something – anything – other than my imaginary husband and his whereabouts, but the conversation simply cannot move past his absence until he is reassuringly there in the flesh beside me. I guess women can travel the world alone, but their interactions with others are going to be limited and redundant.

At any rate, I finally made it to Savannakhet, before midnight and still single, so it could have been a worse day overall.