My Aunt Joan, a high school teacher in New Jersey, has a student from Vietnam, and when Aunt Joan told this student I was visiting her home, she very kindly hooked me up with her family. I called them my first night in Saigon (Ho Chi Minh City, technically, although District 1, where I stayed the first night is still officially called Saigon, and locals tend to call the whole city by its former name) and they arrived at my hotel early next morning. Ms. Quyen, my Aunt’s student’s mother, does not speak English, so had brought along Ms. Anh, her daughter’s English teacher, to translate. Over breakfast pho (Vietnamese noodle soup), they explained that where I was staying (the tourist district in the city center) was very dangerous and expensive, and I’d be more comfortable at Ms. Quyen’s house.

So, I hopped on the back of Ms. Quyen’s moto and she took me to her neck of the woods. I haven’t written much yet about the whole moto thing, so let me take this opportunity to say that it is the most terrifying form of transport I have yet experienced, and it is also the main form in all of these countries. Everyone rides motos – whole four-person families crammed on one, women in short skirts riding side-saddle (which is tougher than they make it look), babies barely old enough to hold up their own heads loosely grasped by one parental hand, or even clinging themselves to the handlebars or the back of the seat. All motos drive at breakneck speed, do not ever stop, and frequently squeeze between turning vehicles or play chicken in the oncoming lane. When you cross a street in Southeast Asia (on foot, or by moto or bike), you don’t wait for a break in traffic, because there will not be one; nor do you run (though every cell in your body is screaming for you to do so) because they’ll hit you. Instead, you stroll slowly and purposefully into the street and allow all the motos, bikes, cars and tour buses to zip to either side of you. If you are on a moto, and the driver needs to turn left, she just turns into the oncoming lane and sort of wades her way across.

Ms. Quyen’s house is very large and nice, and her husband is friendly and always laughing, and their little girl is adorable and shy and always prancing around like a little fairy. Most people in Southeast Asia try not to go out between 11:00 a.m. and 2:00 p.m., as the sun is most intense during those hours, but about 3:00, Ms. Quyen took me out to see a few sights. Another general Southeast Asian thing I’ve neglected to mention is how much clothes everyone wears. I don’t know where the whole ‘light, loose, full-coverage clothes are better for hot climates than shorts and tanks’ idea came from, but it’s honky. I’ve tried it; within five minutes I look like I’ve been pushed in a pond and everything begins to chafe. In these countries, the Western tourists can barely stand to keep their naughty bits covered, but the locals wear full on jeans and jackets everywhere: not even light and loose! In the house, Ms. Quyen wore a light sundress, but every time we ventured out into the blazing sun, she put on jeans, a short-sleeved sweater, a corduroy jacket, socks, leather booties, gloves, a wide-brimmed hat, sunglasses and a dust mask that covered the bottom half of her face. My refusal to wear a hat worried her no end.

We had a nice afternoon visiting a pagoda, friends of Ms. Quyen with an 18-year-old daughter who speaks English, and a giant Catholic church that makes liberal use of neon bars in its decor, then had some beef pho for dinner.

The next morning, I was picked up at 9:00 by Ms. Anh’s 29-year-old son, Rene, who’d been instructed to take me wherever I wanted to go all day long and pay for it. I wanted to go to the War Remnants Museum, which used to be called The Museum of Chinese and American War Crimes, until the directors realized it was mostly a museum for Chinese and American tourists. Still, it’s a museum totally filled with graphic photos of what my country did in Vietnam, and you don’t know what awkward is until you’re standing next to your new Vietnamese friend solemnly regarding a wall of blow-ups of My Lai. I should have said I wanted to go to the Fine Arts Museum.

Rene didn’t seem to speak English at all, and didn’t seem too chatty a guy in his own tongue, so I had no luck drawing him out. After the atrocity museum, he took me back to Ms. Quyen’s for lunch (and a two-and-a-half hour rest), then picked me back up that afternoon, and took me to the former Independence Palace, the fancy hut in which the US helped install Diem before he got carried away killing monks and we had to take him out. These days, the building is called ‘Reunification Palace’ and I was surprised to find that it’s, like, soooo ’70s. There’s even a gambling room done in pea green and orange, with a white, plastic circular sofa unit and a bar shaped like a wooden cask. In the basement were…more photos of American war crimes!!! A big group of women in the dark green uniforms tutted and gasped over the photos while I, the only foreigner in the room, stood around trying to look Canadian. 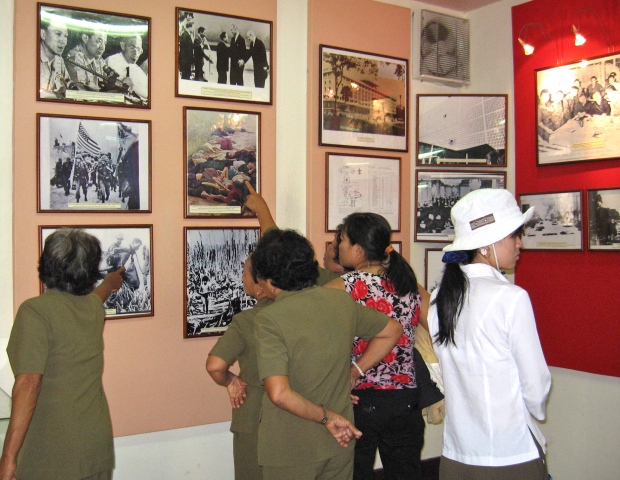 Rene didn’t know what to do with me after that, so he took me home to his mother, who thought I might like another nap. I kind of flat-out refused to rest any further, and so we ended up talking for quite awhile about my travels and my budget. Ms. Anh and Rene were both thrilled to see my open bus ticket: for $22 through an agency, I’d booked a month-long open ticket all the way up Vietnam, with stops at each of the cities I wanted to visit, and I can just hop on and off. Rene has been wanting to go to Hanoi and Halong Bay, but they both thought it would be prohibitively expensive. They were shocked to hear how little I’m spending on my travels overall. I told them to get themselves a Lonely Planet. They got really excited.

After that, Rene took me for dinner (pho) and suddenly opened up and talked a blue streak in perfectly fine English. I don’t know why he’d been so silent all day. Back at the Quyen’s, we went on a family outing to the supermarket. I’d assumed Ms. Quyen had to do some shopping and we were all going along for an activity, but turns out we just went to show me the supermarket. It was a pretty impressive supermarket: an enormous two-story affair with an arcade, and packed with people.

Next morning, I left my new friends and went to Mui Ne, which is a beach town. Mui Ne is expensive (by SE Asian standards) and I had to flee my open bus (which won’t let anyone off, but insists on taking you to each hotel on its list because the company gets a commission) to find a cheap(ish) room. But it is a beautiful beach, wide and white-sand, with clear waters. The fishermen all row around in these little basket-boats shaped like bowls and, because it’s so windy, the sea is packed with kite-surfers. Have I mentioned that SE Asian women bathe fully clothed? Most of them wear long-pant, long-sleeved pajama sets. Meanwhile, many of the European women have trouble even keeping their tops on, which contrast makes the beaches here really entertaining. 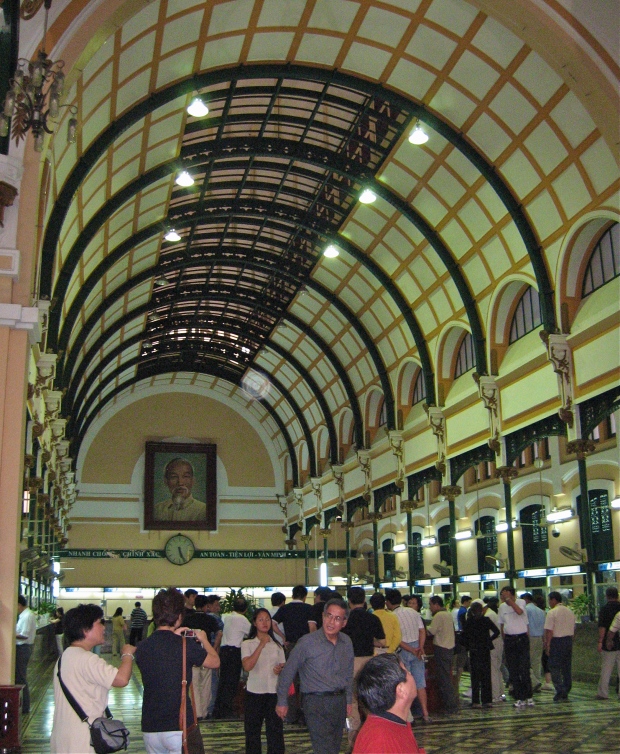