Due to a mix-up with my bus ticket (I confirmed for the bus to Dalat at 7:30 a.m., only to be told when I phoned after no bus appeared that there was no bus that day and I would instead be going tomorrow, causing me to completely lose it over the phone so that they put me on another company’s 1:00 p.m. bus) I ran into April again, and we’ve been traveling together once more.

From the beach at Mui Ne, we headed into the mountains. Dalat is a quaint hill town, where I was cold at night for the first time since China and also had a hot water shower for the first time since China. April and I optimistically rented bikes in the morning, and cycled round the lake, and then the short distance to Crazy Guesthouse, owned by an ex-film star, whose father (as many newspaper articles, tribute posters and shrines throughout the place assert) was ‘right-hand man to Ho Chi Minh.’ The guesthouse is indeed crazy. This woman continually renovates it and it looks a lot like the inside of the giant sea snail in that one Dr. Doolittle movie that no one ever remembers except me: it’s all twisting stairways and low ceilings and tunneled paths into wings shaped like mushrooms, and little mirrored rooms tucked into the nooks and crannies. There’s a big giraffe toward the entrance, and the actual rooms all have fireplaces shaped like huge, plaster animals with red lights in the eyes. They are theme rooms: the eagle for America, the bear for Russia, the ant for Vietnam and so forth.

Despite the coolness of Dalat, it is still a hill town, so April and I wore out on the biking pretty fast and hired motobikes to take us to a village. The village we visited is called ‘Chicken Village,’ because of the huge, stone chicken in its center (a gift from the government [??]). The village itself is very small and mostly farms. We wandered around and nearly got attacked by some dogs in the middle of a patty, only to be rescued by a farmer and given tea by his wife and son. They had a very odd guestbook in which various, random tourists had left little notes, all along the lines of: ‘Very nice family. Gave us tea. Thanks! Pim and David, UK’ and so forth. 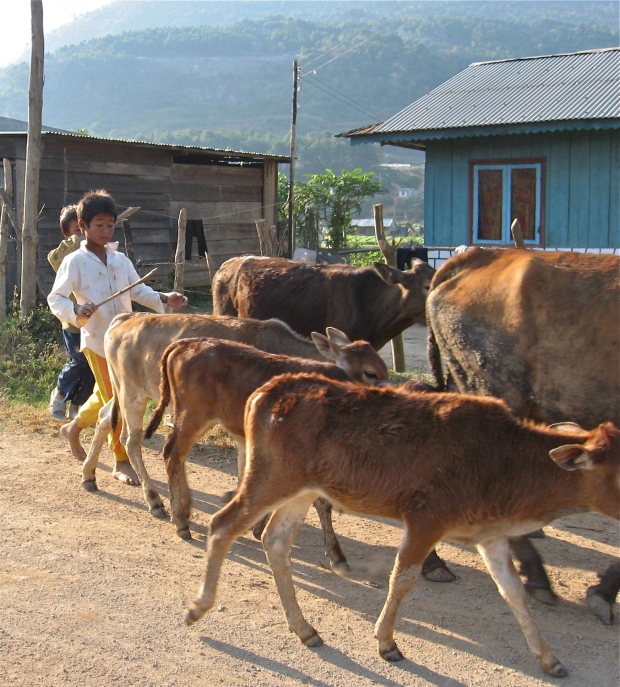 After that, April bought a woven blanket in which to tote around the baby she might one day have (the women who sold it to her let her try it out with real babies – the six-month-old slid out the bottom and the women laughed and laughed), and then we were at a loss for what else to do.

‘And you already had your picture made with the big chicken?’ said the fabric lady. The answer being yes, we went on back to Dalat.

Next day, we proceeded to Nha Trang, which is another beach town, and I don’t really have much to say about it. We lounged on the beach all day, and my legs are now covered in heat rash. The mosquitoes in Vietnam have been unlike anything I’ve yet experienced (they find me even through my reeking screen of 50% DEET), so between the bites, the heat rash and the sunburn, I’m scratching myself so furiously even the locals look at me like I’ve no manners.

The bus from Nha Trang to Hoi An was a night bus, so we sort of killed time all the next day until it left. In my ongoing quest to get comfortable with massages, I finally reached the stage where I tried one involving oil. It was okay. I realize my traveling doesn’t sound all that hard-core lately.

The night bus was 12 hours of torture. I’d heard a lot of horror stories about theft on night buses in Vietnam, and just before I boarded, I ran into a girl I know who had just had her bag grabbed by someone on a motorbike, in broad daylight on a busy street, even though she had it across her chest and was holding it (which I’d believed was a foolproof method to prevent purse-snatching) – they’d just dragged her along behind the bike until (luckily) the strap broke. I put my money down my underpants for the bus trip. I was fortunate, really, because my bus didn’t have that many people on it, so I was able to fully recline my seat and the one next to me, essentially sprawling across four seats as if they were a pallet. I still didn’t sleep a wink. First of all, they shut all the lights out at 8:30, but then around 11, just as I was starting to doze off from sheer boredom, they pulled into a roadside restaurant, where all the locals lingered over dinner for an hour and a half, while the Westerners, having finished their Pringles, sat around bleary-eyed and boiling on the bus. We finally got back on the road about 12:15, only to stop again at 1: they put on all the lights and about eight men boarded the bus, chattering at the tops of their lungs. After that, the lights kept going on and off for the rest of the night for no real reason, and in no time, dawn broke and rain poured down. I met April at a cafe at 6:30 (we have open tickets with two different companies and so travel separately and have to meet up at predetermined cafes, which is really great, because it allows us to escape the endless hotel tour the bus companies make you go on in every city, as they get a commission for each guest they bring to certain hotels); we slogged around in the downpour until we found a decent hotel, and then slept until 2:00 p.m.

Hoi An is very pretty, with lots of early 19th-century architecture (that’s nearly all painted yellow) and pedestrian-only (in theory) streets. The main point of Hoi An is to get all dresses, coats, boots and so on custom-made super cheap by the many tailors and cobblers here. They can copy nearly any design overnight. Any woman would be in hog heaven, except me, because, while I do really enjoy new clothes, the process of acquiring them always seems needlessly taxing. When faced with five million tailoring shops, you could start price-comparing and fabric shopping and browsing and trying on and getting measured and bargaining and thinking of what you need and what you already have and what you might like next season, or you could just…not. I usually pick not. So what I’m mostly doing here is trailing listlessly around after April, like I’m her put-upon boyfriend, and waiting for when it’s time to eat something again.

Eating something turns out to be grand here, however: for the first time since I left home, I have now had real chocolate (not Hershey’s syrup) and real melted cheese (not Kraft slices). I know that probably sounds like a dumb thing to get excited about to anyone reading this, but it’s been nearly three months – the food in China was amazing, but all across Southeast Asia, every menu is a photocopy of the menu before it, and a person can only eat so many giant platters of fried, white starch before they want a bit of a respite. But every time you order Western food in Asia (and there are tons of places serving it), you get the most elaborately awful stuff for insane prices. You might, for example, order chocolate cake and what comes out is Ovaltine sprinkled on a pancake. I have no idea why Hoi An has cornered the market in chocolate and cheese in the region, but I’m glad to be here if only for the eats.