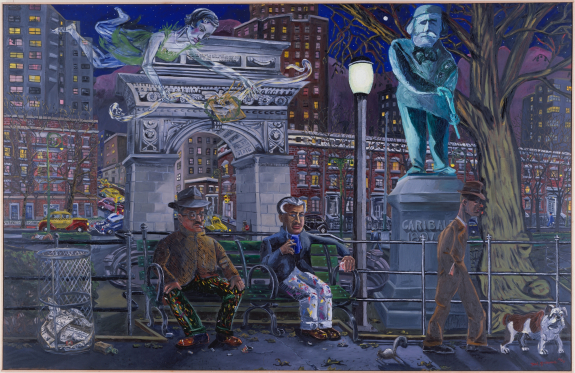 Usually, my Brooklyn neighborhood is pretty sunny and wholesome, but last night, I walked home from a friend’s apartment, where I had just watched Brick, and I don’ t know if it was the movie’s influence, but all down the dark, deserted stretch of Manhattan Avenue, it seemed I was in the gritty, Hopper-esque NY of yore. Piles of garbage and busted furniture lined the curbs. The stores were all shuttered behind their graffiti-covered security gates. The usual drunks were passed out in the usual doorways. Outside the Associated Grocery, an emaciated shirtless man combed through a bag of bottles. A tattooed strung-out couple helped each other try to jimmy into the money slot of the exterior Chase ATM, and glared at me as I passed. In the darkened rear of a nearby bagel store, a security alarm blared. An older lady sniffled on the steps under the Polski church’s towering Gothic spire. In front of me, a woman glided down the sidewalk iin an ankle-length dress; as she passed the OTB, a gust of stale wind blew a stream of paper plates and takeout bags into a halo around her head, and a man’s profile emerged from a shadowed doorway as he turned to watch her, a pipe hanging from his lower lip. The moon was nearly full above the upper floors, where, behind open curtains, tatty furnishings were strobed by blue TV light. Down the empty street, a bus rattled, its few sullen passengers staring into their laps, lit bright against the night. The very air smelled of despair and oregano. As I rounded the corner onto Norman, a clown stood in the center of the empty street, holding a slowly rotating pinwheel and weeping, his tears making tracks through his white makeup. In the gutter outside my apartment, an infant kicked and whined; moments later, a sewer rat dragged it away by the ankle. In the hallway outside my door, a group of refugees huddled around an oil-can fire. They begged me for something to eat, and I gave them half a box of Tic-Tacs. Inside my apartment, my beloved was asleep beneath a pile of newspapers. His tuberculous cough rent the night sky and my heart as the Cimices watered themselves at his shriveled veins, and a buzzard kept patient vigil from the mantelpiece. Rent was due – I stood beneath a bare bulb and forged a check for $2500, as a pipe burst and drywall rained down around me like manna. Ah, New York. New York, New York.