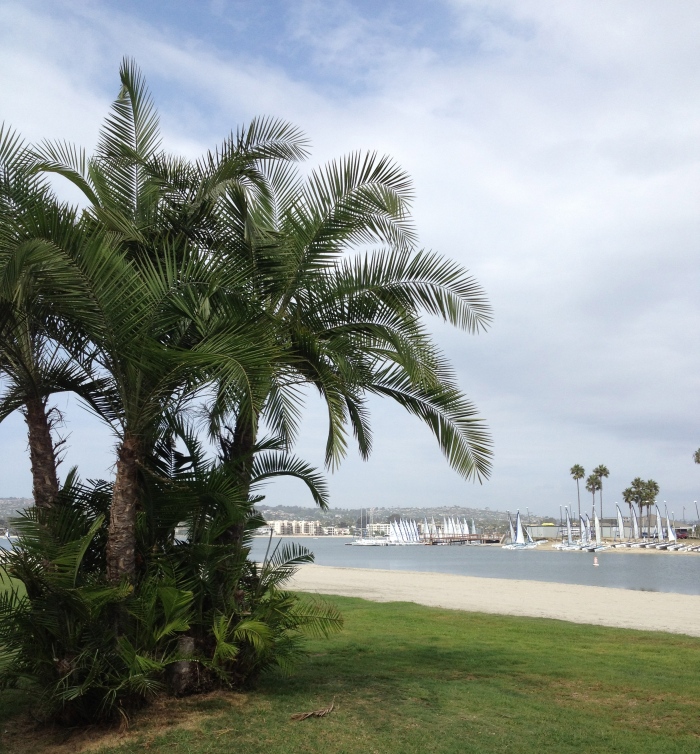 Every year, Automattic has a company-wide meetup. We work on projects, give talks on topics that interest us, take workshops, and most of all hang out with each other in person. This past September, the meetup was in San Diego. I’d only been to California once before – to LA for a long weekend. We stayed at the Catamaran Resort right on the beach. It was gorgeous weather the entire time.

Here’s the view from my hotel room:

These parrots were right outside it:

And here’s the view from the “party suite” on the top floor – there was a wedding on that lawn pretty much every day we were there:

We spent a lot of time walking all around the bay. There were lots of cute beach-front houses with small walled gardens out front and narrow lanes between.

Toward the end of our trip, a group of us rented Segways and rode them all around. I’d never ridden one before. They aren’t exactly the fastest way to get around, but they’re fun in their way. When we rented them, this girl gave us all a tutorial and made us practice a bit. She explained that initially the Segways would be in “turtle mode” which meant they were capped at 6 miles per hour. When we got used to them, we could take them out of turtle mode, and then they’d go 12.5 miles per hour.

When you first step on a Segway, you learn really quickly where your center of balance is, and apparently, mine’s in my ass, because I started going backward immediately. Also, it feels really wobbly and fast at first and you think, “Turtle mode is a-ok with me!” Then, five seconds later, you’re like, “All right, already, is 12mph really all this beast can do?”

We spent about an hour tootling all up and down the beach and around the bay. No major incidents.

I also went sky-diving. But that’s a story for another post.