First of all, if anyone subscribes to this blog, you probably saw a random link post today. I was messing around at work, and that was supposed to publish on a test blog, but it showed up here instead.

Anyway. Speaking of drinking, I recently saw an ad in Harper’s for an introductory case of wine from the WSJ wine club that was $65 for 15 bottles. That’s like $4 something a bottle! I guess it’s sort of the adult version of those ‘get 25 CDs for free and remember to unsubscribe yourself before we charge you every month’ clubs. I never fell for one of those, but I was all over this wine deal.

And now I have this sitting in my hallway: 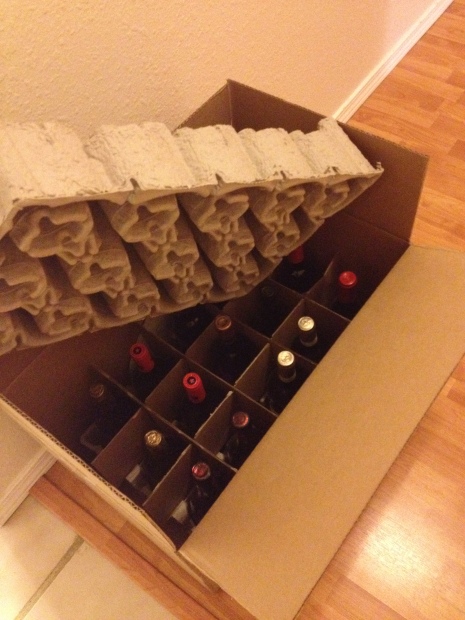 I have absolutely nowhere to put it, so I’m just keeping it by the front door. I’d like to make a joke about how I can’t possibly drink this much wine, but it’ll be gone long before Christmas.

Although! This is really a smart thing to order right before the holidays, and to keep right by the front door, because if you get invited to a party or someone you didn’t expect gives you a gift, you have plenty of nice bottles of wine handy. Although that won’t happen to me, because I don’t leave my house or know anyone.

The FedEx guy who delivered it had to bring a friend to help him carry it from the back of the truck. Helpfully, it was labeled “WSJ Wine Club” right on the side.

Here are the things I’ve now made the delivery people drag into my house in the few months I’ve lived here:

And now that I think about it, I might have a gifting use for those bottles of wine after all. I should probably put some ribbon around them and give them back to the delivery people when next they come.