When I first adopted my rabbit, Thomasina, I was living with two other roommates in a three-bedroom in Brooklyn. The roommates okayed the idea of the rabbit, on the condition that she would be confined to my bedroom for the most part. I built a pretty large cage out of those cheap wire shelving modules that hook together with plastic widgets. They’re called Neat Idea Cubes, and if you Google Neat Idea Cubes, pretty much every result is how to build a bunny cage out of them.

Thomasina had the run of my bedroom when I was home in the mornings and evenings, but when I had to go to work or anywhere else, she went back in her cage. She also slept in her cage overnight. This was how I imagined things would always go.

But as Thomasina and I became more comfortable with each other, she began to gently protest about going in the cage when I left for work, or at night, or at all. I had bunny-proofed my room, so I didn’t really see any harm in leaving her out. For the next year-and-a-half, she mostly lived under my bed.

She is frightened of walking on hard surfaces (for some reason), and so I didn’t have to worry about her leaving the comfort of my bedroom rug and venturing out onto the hardwood floors in the rest of the apartment when I wasn’t there (sometimes when I was home, I laid a trail of blankets out so she could explore and run around). And then a chihuahua moved in, so I kept my bedroom door shut all the time anyway. Whenever I had a houseguest and gave them my room, I still put her in her cage, and it wasn’t difficult to get her in there.

So far, so good. But then Thomasina and I moved back to Knoxville and into my parents’ house. Suddenly, her free-range tendencies became problematic. Thomasina’s cage was located in the corner of the living room, which is a carpeted room with lots of furniture. One of Thomasina’s favorite activities is to get underneath a piece of furniture (for cover from hawks) and pull up the carpet. When she lived in my bedroom, I’d solved this problem by buying fairly cheap, edible 100% jute rugs that she could eat to her heart’s content. But my parents’ carpet was synthetic, so her eating it would just be a bad thing all around for everybody.

This meant that Thomasina needed to go in her cage whenever there wasn’t anybody in the living room. And she was dead set against that idea. So every night, I spent anywhere from 10 minutes to a full hour chasing her all around the room and rousting her from under furniture until she became so exhausted that she gave up and went into her cage. Of all fleeing animals, a rabbit is one of the more difficult to apprehend.

A couple of months later, I moved to Austin. The plan was that my parents would keep Thomasina until I was established and had a place, and then I’d come get her. I didn’t really see my parents chasing the bunny around the living room for an hour before bed each night.

I brainstormed solutions, and then I had a brilliant idea! Thomasina really loves banana. It’s not good for her, so she doesn’t get it much, but it’s her favorite thing in the world. However, it’s not possible to lure her with it. I’d tried. But I thought that what I could do was put a little bit of banana in her cage every night before we began our regular caper. Then, when I finally did get her in for the night, she’d find the treat and associate it with going in her cage.

This didn’t work immediately, but when I left for Austin, I suggested that my parents keep it up just in case. And they reported that it took about a month, but that eventually, Thomasina started readily caging herself every evening and looking all around for her banana. Success!

Except eventually, not so much. Because it didn’t take her long to realize that she could hold out and not go in her cage, and the banana would eventually be coming anyway. So it was back to chasing her all around, the only difference being that when she finally succumbed to exhaustion or inevitability and went into the cage, she got a treat.

And then eventually, I retrieved her and moved her into my own place, which once again had hardwood floors with her area defined by edible jute rugs, so she didn’t have to go in her cage at all anymore. And I continued to give her banana every night anyway, because by this time, it had simply become her just due. 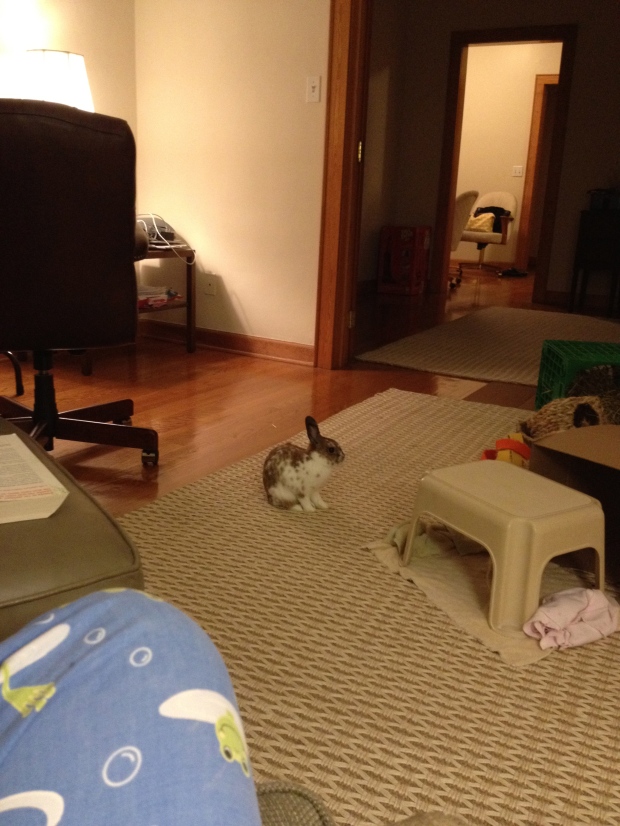 But there was another, more subtle problem with what I had done. When I first adopted Thomasina, one of the things that I loved about her was that she was far more excited to sit on the floor and cuddle with me than she was to be fed. This was bizarre and set her apart from any other kind of pet I’d ever had. I felt like her affection for me was really genuine and not food-based. For the first year or so that I had her, we had a nightly Netflix date, and when it was time for me to sit on the floor with her, she leapt around and danced in excitement. This was really flattering.

But now that the banana had been introduced, her most ecstatic celebrations were reserved for the time when I’d finally get up, start shutting out the lights, and go into the kitchen for her treat. Sitting on the floor with me was no longer any great shakes; the real highlight of her day was when I finally got the fuck out of there and left her alone with her banana.

When Thomasina was a young bunny, she used to be really active and curious. She loved to explore new areas, hop on and off the furniture, and run laps around the apartment whenever I laid blankets out for her benefit.

But as she got older, her energy flagged. In the mornings and evenings when it was prime bunny exercise time, she often just sat there like a lump. She stopped jumping on the furniture. She didn’t run laps anymore, or dance. This was worse in periods when I didn’t spend much time with her, but even when I did she had less energy and curiosity than she’d had as a youngster. She was in a rut. 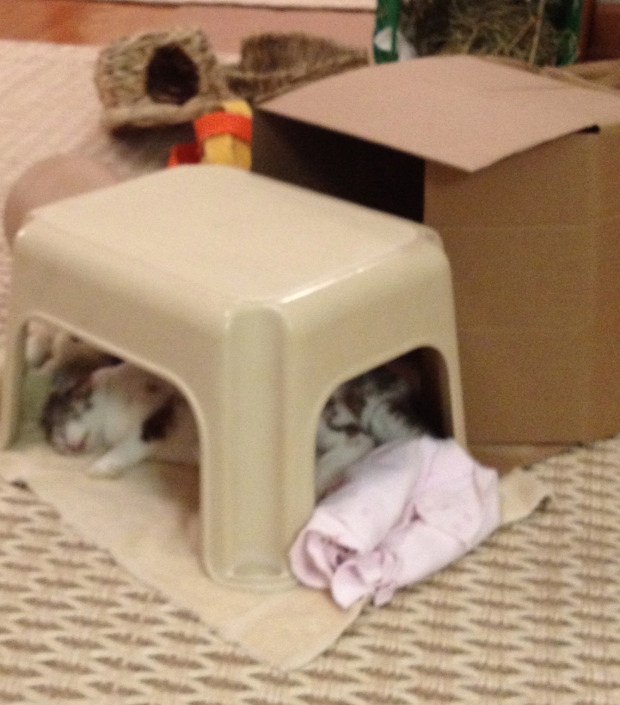 But she could always get it up for that banana.

Thomasina had always seemed to know exactly when the banana was due to be presented, but as the years went on, something really interesting happened. She started anticipating it earlier and earlier in the evening. At first, this annoyed me.

“It’s not time yet, I’m not sleepy!” I’d yell at her as I got up for a second glass of wine, and she circled my ankles in a mad frenzy of anticipation.

The anticipation of the banana was such a delight to her that it eventually seeped into the rest of her day and became just a general, constant feeling of happy anticipation. And now every night that I’m home, she begins to dance as soon as I join her in the den. Life is full of joy, and my presence is always welcome and celebrated. She’s happy all the time now, and she doesn’t even know why. It doesn’t really matter why.

So while my experiment in classical conditioning ultimately failed for the purpose I’d intended, it unexpectedly succeeded in another way: giving great meaning (however artificial) to the narrow life of a pea-brained prey animal.

There’s a lesson in there somewhere.