I’ve subscribed to the local paper here in Albuquerque. I haven’t subscribed to a local paper in, well, ever. But I thought it’d be good to learn a bit about what’s going on here, since I live here now and everything.

Reading a local paper these days is a lot like going to one of those generic stores in a hidden corner of the mall that has gone out of business and has been stripped of all the furnishings and decor and the sign, and just has a bunch of big ‘Going out of Business, Everything 50% Off’ signs in the windows, and cardboard boxes sitting around on card tables with a random assortment of T-shirts and baseball caps in them, and one exhausted-looking old lady behind the counter, half asleep and ignoring everyone and just counting the days until it is finally all over and done with.

Which is to say, it just seems like everyone who had any career options at all has long since abandoned the field, and there’s really not much left. Most stories are from the AP wire, and then there are some syndicated opinion columns. And not even the good syndicated columnists, but people who I’d assumed had retired (if not died) 10 years ago. The relevant community listings in most cities these days are in the free alternative weekly, so the ones in the daily paper seem like some old person’s attempts to figure out what the young folk are up to today by asking their fellow retirees. And last but not least, there’s an incredibly depressing daily “humor” column by a “host comic” at an LA comedy club (sample joke: “President Obama is planning to meet with Pope Francis this year. It’s important that the president and the pope talk things out. Neither one likes the other’s holier-than-thou attitude”).

All of this is to say that subscribing to the paper is one of the better decisions I’ve made in awhile. I’m obsessed with it. Also, I get a nice, sturdy rubber band every day, which is something I didn’t know I needed until it started happening. And Thomasina likes to play with the paper when I’m done.

I’ve already learned some things about my new community. For example, have you heard of the budget measure that blocks funding for horse slaughterhouse safety inspections? Neither had I, but this is a big deal in New Mexico! There’s something about it most every day. Apparently, we were possibly going to have our very own horse slaughter facility right here in the state (instead of shipping our half-dead horses off to Canada or Mexico to be slaughtered), but now that’s all shot to hell. Thanks, Obama!

Then on Saturdays, there’s a sheet publishing the mug shots of DWI offenders: 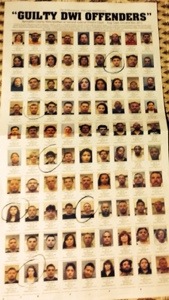 (Pardon the circles, I was playing hot-or-not.)

Not only is this in the paper, but it’s such a hot ticket item, it’s even blurbed on the front page!

The only thing this seems to accomplish is to make a big chunk of the local population less employable, which, to this humble taxpayer, is rather cutting off your nose to spite your face.

Obviously, drunk driving is a terrible problem, but I don’t think the attempts to combat it will ever be effective, because they all rely on drunk people thinking better of it. Whereas the entire point of being drunk is that you are incapable of thinking.

I mean, you take a bunch of people — stupid, careless, overly exhausted people — and you set up society in such a way that every one of these people has to operate a dangerous death machine multiple times a day in order to do anything. It’s insanity, really. None of us should ever be driving. Forget driving drunk — people drive on three hours of sleep. They drive distracted. They drive with screaming little kids in the back, or with a dog climbing onto their shoulders. They drive with a cup of boiling coffee perched between their thighs. Navigating the empty streets at 2:00 a.m. with a high blood alcohol content is arguably no more of a challenge than navigating rush hour traffic while eating a breakfast sandwich, applying mascara, and trying to change the Pandora station on your phone.

People should not be driving drunk, of course, but many of us (myself included) should not be driving at all. I should have been denied a license because I have no depth perception, I’m always drowsy, I’ve never been able to keep my mind on the task at hand, and I’m easily startled. Whenever I’m driving around, I do this thing where I look down at the tires of the car next to me, and then I think that car is merging into my lane and it spooks me, and I kind of jerk the wheel. Sometimes when I’m checking my blind spot, I steer a bit without meaning to. Why doesn’t the driver’s license test screen for this kind of thing? It’s outrageously easy to get and keep a license to operate a car. Especially in America — the most litigious of all of the countries. We don’t even let children eat Pop Rocks.

Whenever the subject of gun control comes up, there’s always some pro gun person who’s like, “well, cars cause more death than guns, should we just take away everybody’s cars?” YES!! Yes, we absolutely should! Cars are CRAZY! It’s crazy that everyone has them and drives them around!

We should have mass public transit everywhere. No one hates being confined in a small space with other human beings more than I do, but it’s the price you pay for leaving your house. Having your own personal oversized, polluting, massively expensive death box that you can use to cruise through the public spaces in (with a seat for you, and at least four other seats that you hardly ever use) seems overly misanthropic and indulgent even to me.

Anyway. All that said, I love this guy: 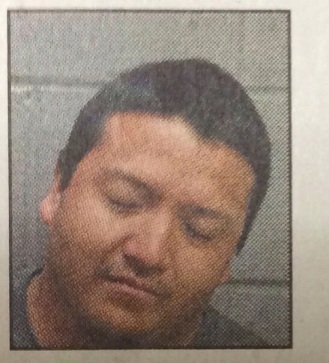 I mean, if you’re going to be taken in for drunk driving, you might as well be so drunk that you can’t even stay conscious for your own mug shot. Go big or go home.