A couple of nights ago, I finally got around to checking out Silicon Valley, and about three minutes in, I realized the show was going to be a total sausage fest.

I had a freshly opened bottle of pinot grigio and so I decided to play a fun drinking game (yes, this is the type of thing I do by myself, I’m a hermit and I make my own fun, ok): every time I saw a woman, I’d drink.

But then my wine was getting really warm, so I revised my plan: instead, I would drink at my own pace, and I’d just jot down every time I saw a woman.

Over the following hour, I watched two episodes of Silicon Valley, drank the entire bottle of pinot grigio, and took the following notes:

Opens. We have a launch party for some app or something. We’re introduced to five white dudes and a South Asian dude, who will be our protagonists.

Everyone in the background? Dudes.

1:50: A joke about how the men and women (referred to as ‘girls’) at such events self-segregate, which will likely be used to justify the show’s self-awareness about its lack of women. Except that the women shown are a bunch of 20-something hotties in tight dresses — clearly meant to be babes who have come to be around rich guys, not fellow programmers.

Some dude talks while a bunch of other dudes stand around.

4:00: Throwaway joke about an erect nipple app, probably referencing this incident, but not very smartly.

6:00: Dudes on a bus, dude talking on a TV on the bus. Joke about a briefly glimpsed woman on a bike being unattractive? Or something? Not sure I get this joke, maybe it’s a Palo Alto thing.

Complex full of dudes, I think supposed to be Google. In the break room, the obligatory African outreach poster is all black boys with a white man. Even the joke about poverty tourism doesn’t include any women.

9:00: Seriously, every single extra in the audience of this TED talk is a dude. I think I maybe see a woman way in the back, but it might just be a guy with Hurley hair.

9:30: We are introduced to our first female character. She is stunning (naturally) and is portraying some kind of assistant to this tech genius? Marketing professional? His PR manager? Not sure yet. She delivers one short line, then quickly beats it offscreen where she turns her back to the camera, and hovers obscurely in the background for awhile.

Me 10 mins into 1st ep of Silicon Valley: "GODFUCKINGDAMMIT where are the women?!?!"

So, I guess it really is accurate satire!

“Maybe if I wear my hair short and don’t speak, no one will notice I have two X chromosomes.”

20:00: Gay guys are mentioned! Grindr! Gay guys have anonymous sex in bathrooms lol what an original bit. So also, I assume from this that no one on the show will be gay (or on the writing staff).

22:00: Woman #1 is back! She talks more. Her position is still not explained at all: “I work with Peter Gregory.” Oh, ok. I guess it doesn’t matter what she does or who she is.

24:00: “Look guys, for thousands of years, guys like us have gotten the shit kicked out of us. But now, for the first time, we are living in an era where we can be in charge and build empires. We could be the Vikings of our day.”

Yep, because the worst social injustice that needs to be righted is the slighting of smart white guys. I feel really inspired and excited to watch these underdogs get rich.

2:20: The first black guy! He’s a pimp. Who introduces the first black lady! Who’s a stripper. At this point, I want to die and kill everyone everywhere.

(I give up on not finishing the whole bottle.)

3:00: All our boys dissolve into disfunction in the presence of the sexxxy lady. See, it’s funny, because they’re nerds and they’re uncomfortable about sex! This isn’t objectionable, right, because you’d expect them to be objectifying her, but really, THEY’RE scared of HER! Because she’s all sex, and they’re all brains! Which is TOTALLY not incredibly sexist and offensive AT ALL, RIGHT?????

“I made this “joke” four years ago, and it was super played out even then.”

4:16: The stripper corners one of the guys, because when strippers aren’t getting any money they TOTALLY want to more aggressively strip rather than just leave, that’s exactly what happens in these situations. To make small talk, she asks the guy what they do, and he says “we’re mostly working on a lossless compression algorithm” and does she understand this? Hells no, she does not understand this! It’s hilarious because she’s a dumb stripper, a WOC WITH BOOBS! Of course she doesn’t understand anything! And he’s a nerd! He’s smart and sexless and about to be rich! I’m actually laughing out loud!!

Wait, no…false alarm. I just choked on some wine.

This is the face this actor made when she first read the script.

You know what might have actually been funny (and in line with what the show has been setting up)? If the stripper and her muscle were also developing an app, like the doctor was earlier. Or taking night classes in coding or something, they could ask for advice on the best immersion course. But no.

5:00: Lots of hilarious jokes about how none of them are paying the stripper, and the big black dude behind her is going to beat on them, because just as women are for breasts, black men are for threatening violence. Oh, my land, I may never stop laughing at this Original Humor.

“If my character had a job, what type of job would it be?”

14:00: Each of the main guys explain what they do to the new business guy. All of this is really funny, especially Martin Starr’s rant.

At this point, the main cast is beginning to be distinguished as the familiar archetypes that you typically see in sitcoms. (And such archetypes can never be women, of course, because then it would just have to be about their sexual involvement with the rest of the cast, which would derail things.)

19:30: Callback to the nipple app joke from Ep 1! Good thing we didn’t let that piece of magic die quietly.

Aaaand the left-out nerd went to visit the stripper. Hence the erect nipple joke. We had a scene about a guy in this group of friends being less smart, less worthwhile, less everything. So where to go from here? Have him degrade some woman! Good thing there are always women to buoy you up by being inherently less than you.

20:00: Lots of jokes about how visiting Mochachino as a last resort is just the lowest young beta male here could ever possibly sink.

21:00: “But what about Nip Alert?” says main nerd. Beta nerd replies, “Mochachino shows her tits for a living? And even she was uncomfortable using it. She said it was ‘sexist.’ She’s right. It’s actually perverted. I made a perverted, sexist, useless thing.”

Oh, because if EVEN THE SEX WORKER (i.e. the lowest of the low) is discomfited by your shitty app, then that means it’s REALLY REALLY bad.

I guess this is what passes for acknowledging sexism on HBO.

28:00: It’s so, so sad that this 30-year-old white guy is good at programming, but not as good as his friends, so he’ll just be comfortable and not MASSIVELY RICH.

There are some interesting themes developing here, about how the economy is changing such that the creators of ideas must now also be businessmen, marketers, and leaders, and they’re not at all suited to it. The same thing is happening with publishing. But I can’t focus on that, because I’m so annoyed (and, by now, drunk).

Wine:00: And here’s another woman! She’s a bank teller. She’s so blown away by how big a check this little nerd has that she says “Wow.”

She is a bank teller and she says WOW to an amount.

I don’t mean to argue against Silicon Valley, really. My axe to grind aside, the show’s pretty good — it’s fresh new material ripe for lampooning, and the cast is perfect. But most of the clunky jokes that don’t land are sexist and racist bits that we’ve heard a thousand times before, and the infuriating thing is, they could easily have replaced those with some much fresher jokes about women in tech! The whole ‘women in tech’ conversation itself is not beyond parody; much about how women and men interact in the tech world is genuinely funny.

I’m not saying they should just put in some token woman dev. It’s very true that women are underrepresented in the startup scene. But they do exist; they could at least have one or two sprinkled around in the background. There could be some disgruntled-looking woman living in the incubator who everyone ignores. Two episodes in, the show doesn’t seem to be satirizing this aspect of things as much as just missing it altogether.

Which is not very surprising. Because another field with a massive ‘lack of women and POC’ problem is comedy writing. 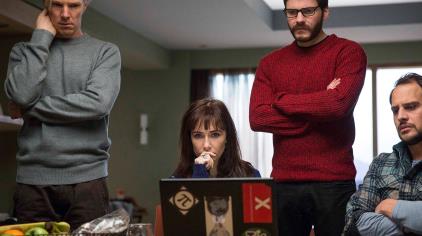