It will surprise exactly no one to hear that I do not typically craft, build, or work with my hands in any way at all, other than typing. But in a moment of spontaneity, I volunteered to help with an event here in Albuquerque that teaches girls to be interested in electricity or something like that.

We’re going to be helping them to make adorable little light-up bookmarks out of felt and LED lights. When I offered to help, I assumed I’d be sort of following along with the girls day-of, but it turns out that it’s a relatively short workshop, so we all need to know how to make this stuff, so that we’re able to actually be of some help during the workshop.

Which is how I found myself on a Saturday evening confronted with this:

There’s a PDF that explains how to sew the bookmarks (which are really much cuter and more interesting than what I’ve managed to make here) — what you’re meant to do is to sew a battery holder thinger to the back of the bookmark using conductive thread, and then you sew down the bookmark and around the positive side of one or more little LED lights, and then you do the same thing with the negative side.

Simple enough, as it turns out, although I think it’s supposed to look somewhat more polished than this:

The real problem for me was less making the circuit work and more basic sewing. But I mean, look at this shit:

That’s meant to show you how to knot your thread when you’ve finished stitching, and if you can make heads or tails of it, more power to you. I just made a big, elaborate tangle out of the thread and then trimmed off the bunchy bits, and it held up, more or less. It’s not like a bookmark gets a ton of wear and tear.

The other thing is, it’s best to pay attention to both the front and back of your bookmark while you’re making it, because otherwise, the aesthetics leave something to be desired: 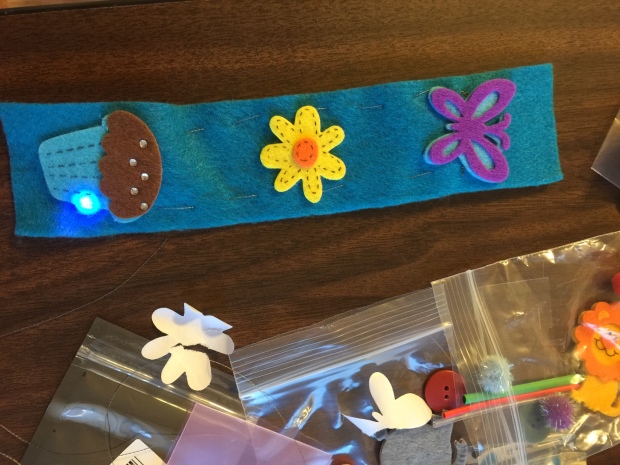 Still, the light worked. I even added another one (also not very aesthetically pleasing, but then, what did you do last night that was so fucking great):

At this point, I have to tell you, I felt mightily accomplished. So much so that I decided to keep the party going and assemble a flat-pack bookcase that had been sitting in its box for a couple of weeks.

The catch-22 of flat pack furniture is that if you plan to assemble it without punching a hole in the wall or screaming at your children, you need to have some wine while you put it together. But drinking makes you somewhat less attentive to detail.

Which resulted in this. Once again, it’s more or less functional, but the aesthetics tripped me up:

Whatever, I can just hang a cloth over that bit. Or pin some fancy LED felt bookmarks to it.

The other thing is, there’s sort of a big gap where the top half of the bookcase is supposed to bolt into the bottom half. The bolts didn’t go all the way into the wood. So is it possible that this bookcase will fall over at some point?

I would say it is not only possible, but probable! But, you know, you can’t control every single little thing in life, and I don’t ever sit on that half of the room anyway.