Back in April, I spent two weeks in Belize. The first week was a meetup with my coworkers, and it was on the island of San Pedro, which is one of the two main tourist islands off of Ambergris Caye (the other being Caye Caulker). We had a small lodge (Sundiver Lodge) to ourselves — nine of us were there, plus the staff.

It was a bit of a job getting to the island. After flying into the one-horse airport, we had the option of taking a 20 minute flight or a three-hour water taxi over to San Pedro. Almost everyone went for the flight, but Jerry and I went for the water taxi, because reasons.

After living in the desert for two years, the humidity hit me the second I stepped off the plane. The air felt like a warm wet blanket all around me. We stopped by the duty-free to stock up on liquor and wine and then took a taxi through Belize City to the docks. Belize City is full of sherbert-colored buildings, palm trees, construction, and school children in white polyester uniforms.

At the docks, we bought our tickets and had a beer before joining a long line of sweating locals and tourists and hustling down into the water taxi interior. The water taxi journey was fairly endless, but at long last, we arrived in downtown San Pedro, which consists of a Main Street, with many bars with patios overlooking the beach and docks down one side, and shops and restaurants down the other.

Finally, after one more water taxi ride to the Sundiver, we arrived at our very own dock! Incidentally, the water taxi system on San Pedro seems to run rather on island time. If you’re going from downtown to one of the resorts, there’s a pretty regular schedule, but if you’re traveling the other way around, it’s sort of on you to attract enough attention to yourself to get a water taxi to come by your dock. Several nights, I watched the staff from our resort run to the end of the pier in the evenings and jump madly up and down, waving their arms, only to be ignored by a passing water taxi and settle down to wait for the next one.

That first evening, we arrived after dark and found our coworkers relaxing by the pool, drinking rum punch made by the bartender, Willy, who would be our constant companion over the next week. In fact, so constant were we that by about our fourth day there, Willy asked us if we maybe didn’t want to get the hell out and see some more of the island given that we hadn’t yet left once.

But we were officially there to work, and we got into a pretty consistent daily routine. After a breakfast of homemade tortillas and fresh fruit, we’d put in a few hours on our project in the main room. Around 10:00 a.m., we’d hear Willy out in the cabana bar, firing up the reggae covers of American pop hits (reggae Celine Dion, anyone?) and looking longingly in our direction. (It was understandably difficult to explain that we had really come to such a place to do some work.)

Still, we resisted answering the siren song of the blender until after lunch, when we’d take a swim (or nap), drink, and ceviche break for a couple of hours. Willy made us delicious mojitos and pina coladas, and one day when we had drunk all the coconut juice, he scaled a palm tree and then spent an hour in the blazing sun hacking at coconuts with a machete, to make us drinks with the coconut water. Those drinks were disgusting, but of course, we drank them anyway.

Then, showers and back to work for the afternoon until dinner at 8 or so (all of our meals were prepared and served by the staff, and it was a huge time saver not to have to figure out every meal). After dinner, we’d hang out with Willy at the bar, and he would typically challenge us to entertain him with some “karaoke” (singing along to his phone) or some sort of guessing game. And then bed, and do it all over again in the morning.

The Belizean cayes are sheltered from the ocean by a great barrier reef. This makes for excellent snorkeling and diving, but it does not make for good beaches, as there isn’t any shore erosion to create them. Which is why we spent most of our time hanging out poolside.

We did manage to tear ourselves away from the pool to go on one outing, however, which I will write about next post.

I failed to take pretty much any photographs at all, so (almost all of) these are all borrowed from my much more diligent coworker, Victoria.

Working in the main room 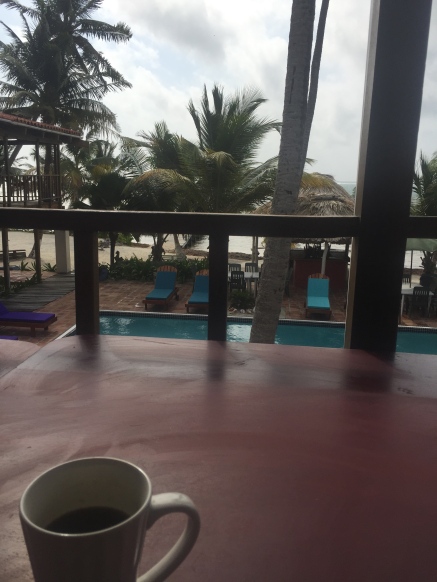 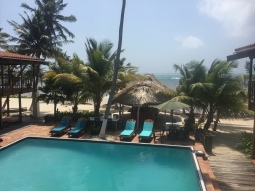 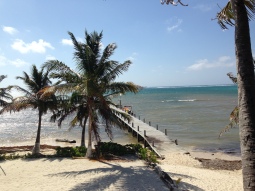 Even harder at work 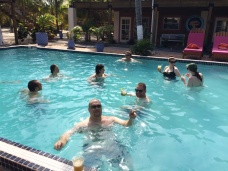 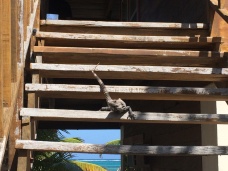 Unrealistic Depiction of My Life