Our group outing for the week was a snorkeling trip. My coworker, Denise, who planned our entire trip because she’s awesome, had reserved for us a super fancy-schmancy boat. I think that the first time anyone invites you on a boat trip, most people picture some sort of yacht and end up in a rusted out rowboat, so over the years, you learn to curb your expectations, boat-wise. But this boat was a very excellent boat, with a big comfortable deck and mats and beanbags to sprawl out on.

We rolled up to the first snorkel spot towering above everybody else in their little dinghies, like we were rappers or something. The snorkeling was excellent, as well — at least, I think it was. This was actually my first time snorkeling so I have no basis for comparison. The great thing about snorkeling is the crystal clear turquoise water, the beautiful rainbow-colored fish, the warmth on your back (I knew to wear a shirt), and the luxury of just bobbing effortlessly along while a subterranean world unfolds before you.

Less great things about snorkeling include the occasional mouth full of salt water, the grubby mouth piece tasting of ocean and fish, routinely getting slapped across the face with other people’s flippers, trying very hard not to wallow up against a fragile, protected coral reef, and the smell that eventually builds up in your snorkel mask.

We broke up into two groups and swam around the reef with our guides, who explained about the various fishes and types of coral, and tried to tease some moray eels out to where we could see them. The reef was really crowded that day — a turtle resembled a starlet in the midst of a swarm of masked, flippered paparazzi. And at one point, a fleet of scuba-diving men cruised directly underneath me, which was rather surreal.

My favorite fish were the yellow-head wrasse (while not as colorful as some fish, the schools of them were adorable) and the stoplight parrotfish (the latter fish I saw on my second snorkeling trip, and it was so gorgeous that I actually gasped…and got a lungful of seawater as a wave went over me at that moment). 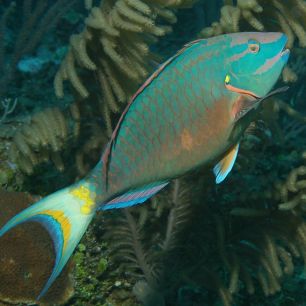 We then got back on our boat and headed over to Shark Ray Alley, a section of the reef so named because fishing boats have always dumped their scraps overboard there, with the result that the area is thronging with nurse sharks and rays who don’t mind swimming right up to boats and people. We anchored and our guides got busy throwing rotten fish and crab carcasses into the water for the nurse sharks to snap up with a distincive popping sound their little suction cup mouths make. The rest of us dropped in undetected (mostly, that is; when it was my turn to get in, all the sharks bumrushed me) off the other side of the boat and swam around behind them to watch them feast. These photos are again from my coworker, Victoria, who came equipped with an underwater GoPro and selfie stick.

Listening to our guide 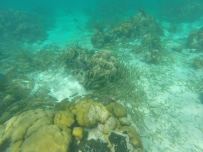 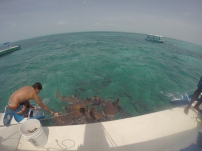 Me and the sharks

Fish in the way

Caye Caulker is a tie-dyed fantasia of Caribbean tourism, with car-free white streets gleaming beneath a pitiless sun. We crawled along attempting to explore while our cover-up clothing became quickly as sopping wet as our suits had been, and the exposed tops of our feet started to smoke. It was so hot, the vendors hawking cowrie-shell figurines and cornrow braiding couldn’t even be bothered to call out to us.

Eventually we arrived at our lunch destination, Wish Willy’s, a relaxed backyard restaurant with a bunch of card tables spread out in the yard around a house. We were fed piles of delicious grilled meats, seafood, and veggies cooked by the proprietor (Willy?) on a nearby grill.

After that, we walked up to the Split, which is a waterway dividing the island in two. The Lazy Lizard bar dominates the Split, with docks for sunbathing and a lagoon with bar tables for standing in up to your waist while children splash around you. We drank in the shade until it was time to get back on our boat and head back to the Sundiver, where Willy had been anxiously awaiting us with a newly replenished stock of coconut rum.