On the last night of my work meetup, my BFF, E, met up with me, and we struck out from San Pedro the next morning to spend a week exploring Belize. We hadn’t done any planning in advance, so I suggested we first go stay on Caye Caulker for a day or two and soak up some island time.

We took a water taxi over, found a room, and then, it being so hot we couldn’t think of anything but getting under water as quickly as possible, we headed up to the Split for margs and swimming in that order. The split has this deep churning neon turquoise water all around the docks, but no one was swimming in it, which we thought odd, but soon realized was due to the strength of the current, which nearly carried us out to sea. We struggled around in it for awhile, always stopping before we were in risk of humiliating ourselves (it’s not the being carried out to sea that concerns; it’s the having to exert a very great deal of effort not to be carried out to sea in front of the staring eyes of many, many sunbathers who are all weighing whether or not someone is going to be required to dive in and drag you out), and made some friends. I have a pretty noticeable tattoo on my left forearm of three colored chevrons. It’s not meant to be military; it’s just supposed to be a random geometrical design. But it looks military, and everyone in Belize kept calling me ‘sergeant’ which was embarrassing. 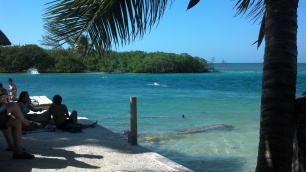 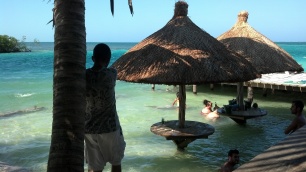 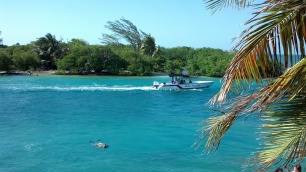 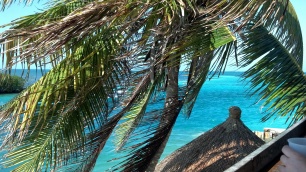 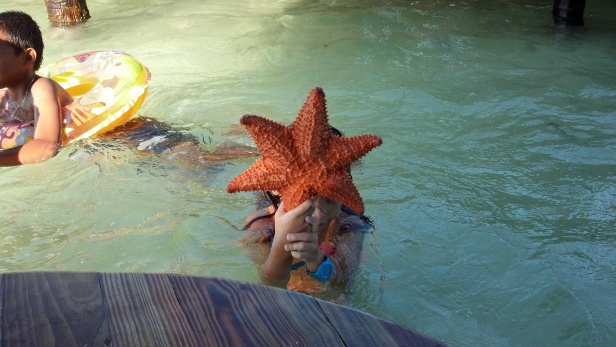 Incidentally, all of these photos are by E; I took basically no photos on this trip.

After we wore that out and the sun had started to sink a bit, we explored the island, which is small and colorful and full of chihuahuas and pit bulls and families zooming around in golf carts and men sprawled out under the trees who say things like, “Slow down, ladies, you goin get a speedin’ ticket.” The main drag is lined with restaurants and bars and shops selling tours, and it dead ends at a bright yellow and orange hotel next to a small overgrown cemetery. Up and down each coast of the island are neon-colored hotels with large verandas and neatly swept private seating areas in front of the docks. 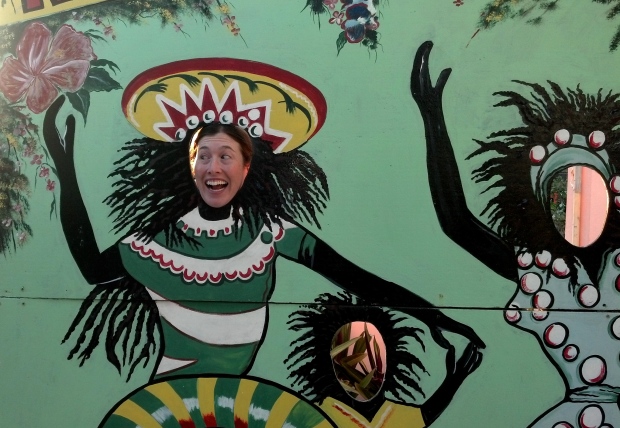 And then quickly moved along to more of this: 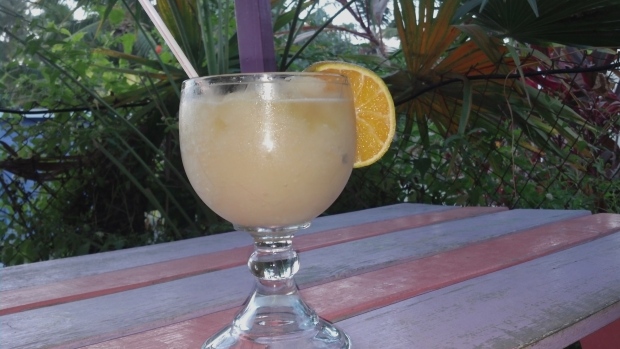 Which led to some of this:

And eventually progressed to this: 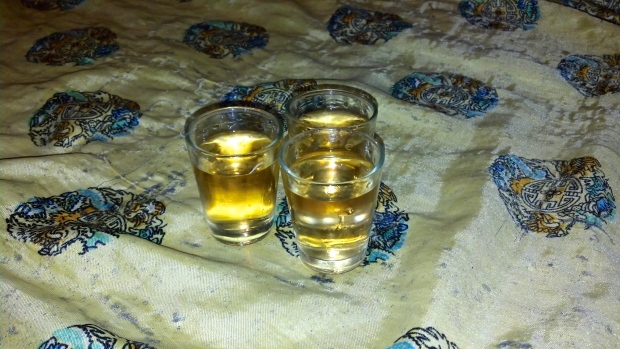 After which, things quickly went downhill (relatives and coworkers might wish to skip down five paragraphs or so).

E and I have a little problem in that every time we get together, we are so extremely excited to hang out with each other again that we (completely accidentally) go out of the gates way, way too hard, after which we are extremely remorseful and behave ourselves the entire rest of the time, and swear up and down that it will never happen again. Then, the next time we get together we have a big hearty laugh about how ridiculously we behaved the last time we hung out, and we sure will not be making that mistake this time, and then…yeah.

How it happened this time was, we went to dinner at Wish Willy’s because I wanted more of the delicious fish I had had. And it was just as delicious, but this time, the proprietor, Willy(?), who is a perennially stoned man with a big mass of braids and a very relaxed approach to life, decided to park himself at our table and talk to us all night, and to present us with many, many shots of very nice rum.

Now, at some point in life, all women have to learn that just because a man is putting a never-ending series of drinks in front of you does not mean you should just go ahead and drink them all. And I fully intend to learn this myself any day now.

After this, things are a bit of a blur, but I do remember the three of us skipping merrily through the streets of Caye Caulker holding hands and possibly singing, and then spending some time at a bar which was full of swings instead of benches, and then E and I making our way back to our hotel via the extreme scenic route. And then being very, very sick. Now that we’re in our mature 30s, I can at least say that we were in bed by about 11:00pm, which makes the amount of damage we were able to do beforehand all the more impressive.

Next morning, we were in no hurry to get moving, but eventually, we dragged ourselves up and showered, and went out in search of breakfast.

But on the way, I unfortunately had cause to stop into the office and request maid service with many apologies (all my fault). The giant, round manager in T-shirt, shorts, and flip-flops was sprawled out behind his desk, and a small, silent, scowling guy was hunched in a chair by the door, so I had an extra witness as I apologized profusely and blushed and stammered through an explanation that I had exceeded my personal limits the night before, rum-wise, and had become ill rather inconveniently just outside the bathroom, and so perhaps it would be best if some cleaning supplies could just be dropped off in our room so that I could deal with it myself.

After a moment of shocked silence, the manager waved his hand in front of his face. “No worries,” he said, grandly. “This is your vacation, we will take care of everything.”

“–You do whatever you like, lady. Enjoy yourself. We are here to serve you.”

I stammered another apology and beat it, and as I left, the previously silent man in the chair by the door winked at me and said, “You have a good day now, sergeant.”

Which is all to say that I am so happy to represent American women wherever I travel, and to contradict the unfortunate stereotypes re: us by always conducting myself with dignity, grace, and cultural sensitivity.

Anywhoo, having completely destroyed my reputation in Caye Caulker within twelve hours of setting foot on it, I rewarded myself with an enormous quesadilla and a great deal of coffee, and then E and I found some shore-side chairs to collapse in for a while, and watched a man throw coconuts off a pier for his pit bulls to retrieve.

Miraculously, we started to feel better — so much so, that we thought we might be able to do some snorkeling. It was late afternoon by this time, so most of the tours were done, but we did manage to find one guy who was going out, Carlos. He took us and two Canadian girls (who I gathered were getting a late start for similar reasons) out on his little boat, and we went out to the reef and snorkeled for hours and hours. It was pretty fantastic. There was basically nobody out but us, it being late and also pretty choppy out. It was so choppy that as you snorkeled along, you’d see the trench between a wave pulling down right in front of you, and the silt was kicked up a bit, but visibility was still really great.

Carlos gave us a bit of a tour, but then after that, he let us snorkel until we wore it out. We went to three different spots in the reef, including Shark Ray Alley, where I had the extremely bizarre experience of being “hugged” by a stingray — one rose up out of the water and just completely enveloped me. Carlos had been going around petting and bear-hugging all the sharks and rays (which I don’t think is really allowed, but whatever) and feeding them fish heads, and I guess this one was looking for more food. I reacted about how I do whenever I’m bear-hugged by a stranger with no preliminaries, by swearing and flailing around. I hope I didn’t offend the ray or anything; I was just surprised.

After we’d snorkeled to our heart’s content, Carlos gave us a tour around Caye Caulker, pointing out the various buildings and the wildlife, and a sinkhole, and explaining aspects of the island’s unique ecosystem (pelicans shit in the trees, which drips down to the water and feeds the baby fish), and about the caves that run all underneath the islands (it’s like Swiss cheese, some people set out to explore them all once, but they died and no one’s tried it since).

That evening, E and I watched the sunset and then went to dinner, and managed not to disgrace ourselves. 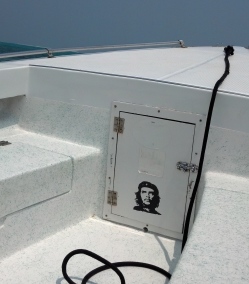 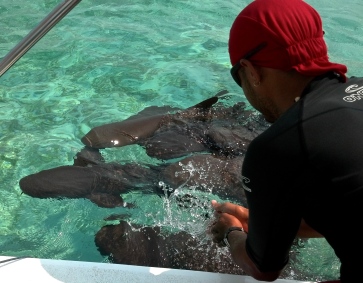