After our caving adventure, it was time to leave the jungle, but we wanted to make our travel day count. We planned to take a cab to visit Xunantunich, one of the larger Mayan ruins in the area, and then come back to the hotel, pick up our bags, and try to catch a bus into Belmopan and from there to Belize City.

We weren’t looking forward to that part, because San Ignacio did not have a bus station, so getting the bus would involve lugging our bags either up the hill or down into town, and then waiting in the hot sun for a bus to hopefully happen by. So when our cab driver, William, offered us his services for the day to take us to Xunantunich, the zoo, and then into Belize City, we took him up on it without bothering to haggle (in fact, we didn’t haggle at all on this trip — so much so that at one point, a cab driver actually lowered his initially quoted price when he dropped us off, because he felt guilty we’d agreed to it).

To get to the ruins, you have to cross a river by hand-cranked ferry, which was pretty cool. It’s like a big metal pavilion that you step onto, and then a couple of guys turn a hand crank to move it (slowly) from one side of the river to the other.

Xunantunich came highly recommended by Carlos (in fact, he had sort of yelled at us a lot when he heard we didn’t plan to see it), and he and William both mentioned the howler monkeys and other wildlife we were likely to see in the surrounding jungle if we kept our eyes peeled. The monkeys must have been off on a field trip that day, but we did spot this massive and angry-looking spiny iguana: 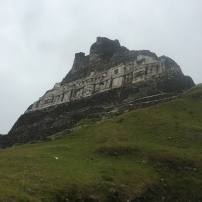 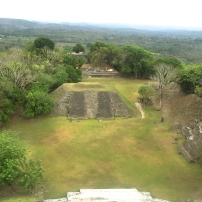 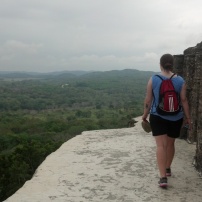 After we’d worn that out, William took us to the Belize zoo. Like most liberal spoilsport killjoys, I object to zoos in many ways, but it’s a shame because I also really love staring at animals. Especially very small furry ones, for which my attention span is strangely endless; I can sit and stare them all day (hence my living with a rabbit). The Belize zoo is a rescue zoo, though, and has only animals native to Belize, and none taken from the wild. It was a really cute zoo, with signboards outside every exhibit explaining about the specific animal within, its name, its history, its likes and dislikes, and what it was looking for in a partner.

The zoo was also full of school groups running around in matching T-shirts and screaming. We saw howler monkeys (although none of them howled – we thought one was at one point, but it was a tour guide howling at the monkeys trying to get them to howl), tapirs, other monkeys, various large jungle cats, toucans, and at one point even spotted what I’m pretty sure was a gibnut running down a utility path. And while a tasteful person probably wouldn’t mention it, we also saw a tapir penis, which I primarily bring up because it’s in the photo below and I feel you should be prepared. 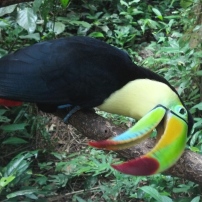 When we were finished at the zoo, William took us to a nearby restaurant for lunch. Now, I haven’t said much about William up until now, but he was a very dour fellow. He talked ceaselessly in a low expressionless voice, pointing out various landmarks to us, and explaining things about Belize, but all of his stories were incredibly depressing. First of all, he’d point out things that weren’t really interesting, so much as just…there (“over there, some power lines. That is a church, I think. That, a grocery store”), and secondly, he seemed to view everything in a particularly dark way.

“That there is a new building very nice,” he’d say. “The old one burnt down some years ago, and four people died. Four, or was it five? I think it was four. One was a child, very sad. Oh, see this man coming here? I knew his family. They tried to start a business but became bankrupt. One of their daughters was hit by a car. Very sad. I had a cousin hit by a car. Killed. Very sad, you know. Many people die from this. See this market here? It used to be run by a very good man, but he has moved away. Now it’s run down, all dirty, the new owners do not care. But, you know, things change, always changing.”

At some point, it came out that his wife had died a year or so earlier, so I think he was just deeply grieving and hadn’t gotten over it. I felt sorry for him and all, but jeez was he ever a bummer to spend a day with!

So when we stopped for lunch, E and I were a bit dismayed to realize that William planned to join us. And as soon as we had sat down at a table on the edge of the patio, he picked up a story he’d been talking about hours earlier about some family that had been murdered in a nearby town.

“They say,” he said, out of nowhere, as we all stared out over the meadow that edged the restaurant, full of green grasses blowing in the breeze and the tiny birds darting around. “That when they found the woman, her face was so beaten that they could not identify her. That such a thing could happen here in Belize. You know? Very sad.”

We had stew chicken and rice. It was pretty good.

After that, William drove us into Belize City, where we picked a hotel on the waterfront — a large, old building with a wrap around porch. There were tons of blue crabs in all the flower beds out front, and I spent a lot of time watching them scuttle into their holes and then slowly, slowly creep out again when they thought I had gone. But I hadn’t. I was still there, watching them.

We had the attic room, which was huge and had a little porch-type dormer that extended out from the room and had big picture windows overlooking the sea. It was really nice, except that the floor of it was completely collapsed around the edges, such that if you didn’t notice in time, you would plummet to your death, taking the flooring with you. William would have spotted that part right off.

We took a walk toward town, but we ended up getting tailed by a loquacious street person who looked like the last surviving Deadhead and who really, really wanted to give us a tour of the city. We kept going around several streets only to run into this guy again. Also, everything was closed because it was Labour Day weekend, and the streets were pretty deserted. Eventually, we gave up and headed back to the hotel, and on the other side of it, we found a little outdoor snack bar that was open, so we sat there and had a couple beers. The server told us that they were a new establishment and her boss was making them stay open 24/7 over the Labour Day holiday in hopes of capturing business. So far, the strategy did not appear to be working.

After that, we took showers and hung out a bit, and then we went to a seafood restaurant nearby, which was mediocre, and then we had a couple more drinks at an outdoor bar and went to bed.

The next day was our final day in Belize. We woke to a violent storm, and so had breakfast in the hotel restaurant while we watched the rain lash down into the ocean. By the time we’d finished, it had cleared up, so we picked up our aborted walk from the night before and went down into town and had a look at the swing bridge.

Walking around Belize City is intimidating; the city seems to be mostly full of gangs of young men hanging out in doorways, ogling and harassing passing women. So, just like most large American cities.

By the time we got back to our hotel, it was time to pack up and go to the airport, alas. I’m usually ready to go home by the end of my travels, but I wasn’t this time. I don’t think either of us were.